Close results
Back to search

It is a generally accepted fact that the dielectric and outer conductor of a coax cable have the most influence over phase stability verses temperature.

At high frequencies, most of the electrical energy travels through the dielectric rather than the conductors.  There are two very important electrical characteristics that must be considered in the design and use of a dielectric in coax cables.

The second important characteristic is the Dissipation Factor which is the measurement of how much electrical energy is dissipated in the form of heat.  The more the amount of signal that is converted into heat, the higher the loss.

Historically, Polytetrafluoroethylene (PTFE) a synthetic fluoropolymer of tetrafluoroethylene has been considered the best dielectric material option for coax cable compared to air.  It provides an excellent insulation layer for electrical isolation between the center and secondary conductors.  It also provides good mechanical support between the two conductors along a common axis.

The problem is, that despite these attributes, PTFE demonstrates a troublesome phenomenon known as the “PTFE Knee”.  The PTFE dielectric causes an abrupt shift in phase stability between 0° and +20° C as seen in the graph below. 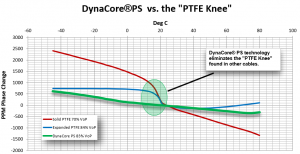 To eliminate this problem, Dynawave has developed a proprietary dielectric material called DynaCore® PS which essentially removes the “PTFE Knee” issue completely.  Although many of Dynawave’s competitors claim to have eliminated the phase shift problem with materials like expanded PTFE and SiO2 dielectrics, the reality is that Dynawave’s PhaseTite® with its Dynacore® PS technology is the most effective at reducing the problem as seen in the following graph below. 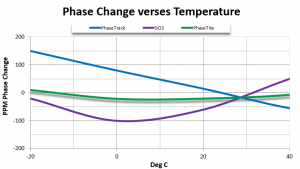 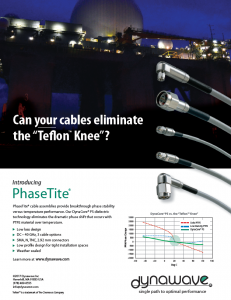 For more information on PhaseTite® or any other Dynawave product, please access Dynawave’s website at www.dynawave.com or consult factory directly at 978-469-0555.